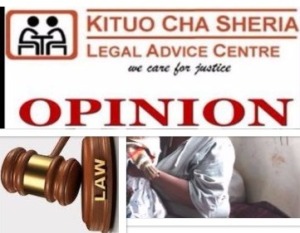 “Our current criminal justice system has no provision for restorative justice, in which an offender confronts the damage they have done and tries to make it right for the people they have harmed. Instead, our system of “corrections” is about arm’s-length revenge and retribution, all day and all night.”
― Piper Kerman, Orange Is the New Black

Prisons are institutions set up for the purpose of taking custody and care of persons convicted of offences by courts of law. The act of imprisonment in itself ordinarily is the punishment. However in Kenya, as Omboto (2010) argues, harsh prison conditions characterized by; congestion, poor diet, debasing clothing and beddings, lack of clean water, poor sanitation, infectious diseases epidemics, homosexuality, drugs, torture and crime are part and parcel of our “rehabilitation” programs. Studies conducted at the Langata Women’s prison show that the children share the same conditions with adults. No special rooms are set aside for inmate mothers and their children hence subjecting these children to horrific and obscene situations,which include; nudity,profanity,violence, homosexuality, sexual violence and drugs. Keep in mind the fact that some of these inmates have been convicted of defilement.

Notwithstanding the foregoing, Kenyan laws allow toddlers to stay with their inmate mothers in prison in certain circumstances.  The law specifically states in Section 30(4) of the Prisons Act cap 90 Laws of Kenya that;

The infant child of a female prisoner may be received into prison with its mother and may be supplied with clothing and necessaries at public expense:

Provided that such child shall only be permitted to remain in prison until it attains the age of four years or until arrangements for its proper care outside prison are concluded, whichever shall be the earlier.

Over and above the challenges faced by the prisoners, warders themselves face challenges such as poor pay, poor living conditions and the lack of skills and expertise to adequately rehabilitate inmates.Of all the challenges facing the prison officials/warders, their deficiency in skills and expertise in penology and corrections is of primordial importance to this article. According to Omboto the want in skilled wardens is diverse from sociologists, psychiatrists, psychologists, professional counsellors,social workers and penologists.The lack of such pertinent skills may be compared to the lack of medical therapy in an endemic.The application of these skills in the rehabilitation efforts of offenders is the purpose of imprisoning the offenders in the first instance. We cannot purport to remedy an ill that we refuse to address and cure.Sadly, children are born into these conditions. Having done no crime, they are sentenced to four of their early years in incarceration, in some extreme cases even longer.

BEST INTEREST OF THE CHILD

The prison system is riddled with corruption, congestion and complacency; the warders in some cases restrict the inmate mothers from making living arrangements for the children outside the prisons. Currently, there are 387 children accompanying their mothers in prison. Catering for them has proven to be a challenge to the prison authorities. The challenges experienced in regard to these children by the warders include; suitable housing, cloths, beddings and other facilities appropriate for children. The day care established at the Lang’ata Women’s Maximum Prison is a step in the right direction. However, there seems to be a lack of adequately trained staff dealing with early education development of these children. Additionally, not all prisons are equipped with these daycares and early childhood development centres. Article 3 of the Convention on the Rights of the Child takes into consideration the Best Interest of the Child. It provides that in all actions considering children, whether undertaken by private or public social welfare institutions, courts of law, administrative authorities or legislative bodies, the best interest of the child shall be a primary consideration.The government of Kenya has greatly infringed upon these rights and indeed freedoms of these children. Granted there are inmate mothers who insist on taking care of their children and those that have no alternative, but at what costs? According to the Presentation done by the Commissioner General of Prisons titled; Towards Decarceration: A Statistical Analysis of Imprisoned Offenders, Challenges and Opportunities for Reform by the Deputy for the year 2016 only, there are 2599 convicted female offenders for the year 2016 only. These women have been charged with the following offences:-

Besides, prison is not a conducive environment for a child’s early development and growth because their psychological and physical welfare may be polluted and stunted. The challenges facing the prison systems and warders in terms of fund and human resource allocation married with the challenges facing the prisoners work at inhibiting proper rehabilitation. It is illogical to include infant children who are physically and psychologically immature into a system that can neither support itself nor provide special care and protection to them. In this case, Kenya jumped the gun in regards to planning. Initially there should be law and policy framework reforms specifically dealing with inmate mothers and their children, followed by the institutional reforms and finally implementation of these sound laws into practice. For example, laws or policies addressing funding, nutrition & health, early child hood development and qualifications of the children developers as well as institutional reforms to include an independent oversight authority that specifically deals with prisons.

Little to no rehabilitation occurs in our prison system as there are far too many criminals and far too little skilled warder/official counterparts. The underfunded and overstretched meagre resources barely cater for the prisoners let alone their children.

For Kenya to fulfil its international and regional obligations expressed in the numerous conventions ratified,in regards to children, certain measure have to be taken to reform the prison system in Kenya.

To permanently alleviate and possibly eradicate these problems the government should set up children homes near the prisons which accommodate the children whose mothers have been convicted. This will ensure that the children are brought up in a conducive environment for psychological and physical development. It is important to note that the children themselves are not convicts and should not be treated as such.